Recanati is a remarkably attractive  hill town, birthplace of one of the greatest Italian poets, Giacomo Leopardi (1798-1837).
He had a sad childhood, self-imprisoned in his father's classics-filled library and spent the rest of his life trying to recapture in his pessimistic verse the illusion of happiness, glimpsed fleetingly as a youth in Recanati. Palazzo Leopardi, at the southern edge of town, where he was born and brought up, holds memorabilia, manuscripts and a library. Around, almost in every corner, plaques mark spots referred to in his poems.

Recanati was also famous in the 16th and 17th century for its commercial fair, one of the most important in the Papal State, and its wide streets and comfortable buildings still bear a mercantile character.

Recanati was also the home town of the great tenor  Beniamino Gigli and the Museo Gigli, in theTheatre Persiani, houses a collection of his costumes from some 30 operas, a mock-up of his dressing-room and some of the many presents he received, including a walking stick from Verdi.

The Museum in Villa Colloredo-Mels, a splendid 18th century villa on the edge of town, holds Recanati's greatest art treasure, a room with four of the finest paintings by Lorenzo Lotto, including the enchanting Annunciation,  packed with almost breathless narrative details - a high spot  for all art-lovers in their  tour in Le Marche. 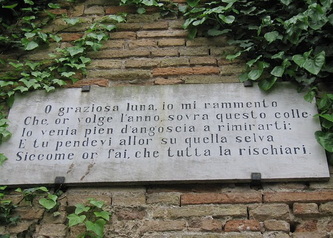 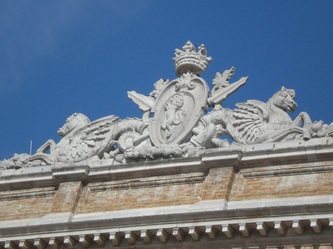 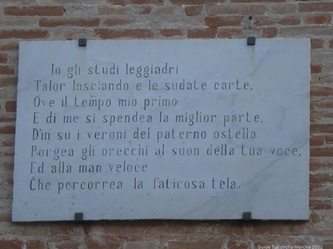